How big is the ICT4D research field?  And is it growing or shrinking?

The first question is harder to answer.  I’ll offer an estimate based on conferences (which will only attract a sub-set of the field e.g. 350 attendees at ICTD2009, and 500 authors submitting papers) and my own contact lists.  On that basis, I estimate that, worldwide, several hundred academics and several thousand PhD researchers are working specifically on ICT4D topics.  They work alongside thousands of staff in donor agencies, national governments and private firms who occasionally contribute to research outputs.  Several thousand more academic staff, particularly in business/management and informatics, undertake occasional research in the field.

What about trends?  One way to measure is through the ISI Web of Knowledge which records books, all papers in a large number of journals and some conferences.  Searching for the term ‘ict4d’ produces only 25 results, almost all during 2007-2009; too few for any real analysis.  Searching for ‘ict*’ and ‘developing countr*’ produces 395 results.  A manual review suggests the great majority are ICT4D-relevant publications, and analysis shows the following trend (note results for 2009 are incomplete as papers are still being entered): 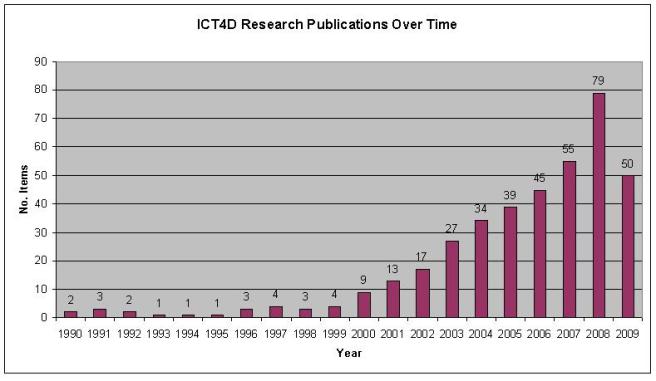 In part, this might be an “ICT effect” reflecting greater use of the term.  But it does also seem to reflect more general research growth in the area of development informatics.  Publications using ‘info*’ and ‘developing countr*’ grew by 80% from 1999-2008 (7% annual average); and the narrower band of publications using ‘information technolog*’ and ‘developing countr*’ grew by 153% from 1999-2008 (from 83 to 210; an 11% annual average).

Just to check there wasn’t a general research growth effect, a cross-check with ‘political’ and ‘developing countr*’ showed a couple of hundred items per year published, but only a 14% growth in the literature from 1999-2008 (1% annual average).  A better cross-check was with just ‘developing countr*’ which showed a 57% growth (5% annual); and just ‘ict*’ which showed a 126% growth (9% annual) during the same period.

From this data, then, ICT4D research publication is growing significantly faster than cognate research areas.

We can draw a similar conclusion of high growth by looking at ICT4D-specific journals.  In 1999, these produced 33 articles.  In 2009, they produced 182 articles; a 450% rise.  This rise was very much related to growth in the number of journals: two in 1999 and eleven today (though one has yet to produce its 2009 edition, and one only produces its first edition in 2010; only one of these journals is covered by the ISI Web of Knowledge).

Given growth and items not covered by these two methods, this suggests at least 300 ICT4D journal articles will be published in 2010, and likely several hundred more under the general banner of development informatics in its broad sense.  Plus, of course, all of the books, reports and conference papers not to mention blogs, wikis and the like.  [See more consideration and detail on this in comment.]

That’s one hell of a change from 1987 when I first started academic work in the field and when, as I never tire of saying, the entire historical academic output on IT and development would fit on a single shelf of my bookcase.  And it indicates ICT4D research as a fast-growing field with all the pros (greater audience, more jobs, more collaborators, more new ideas, more impact) and cons (more to read, greater competition) that brings.