A previous blog entry on publication of ICT4D research through academic outlets suggested that the field was growing fast. In this entry, I look at ICT4D on the web and in the news, and draw some slightly more downbeat conclusions.  These must be taken with a strong pinch of salt because the data looks somewhat cronky.  But what can Google Analytics tell us about ICT4D?

As a search term “ict4d” is insufficiently used to show up in Google Trends but it will appear in Google Insights to produce the following chart and table of web search interest over time: 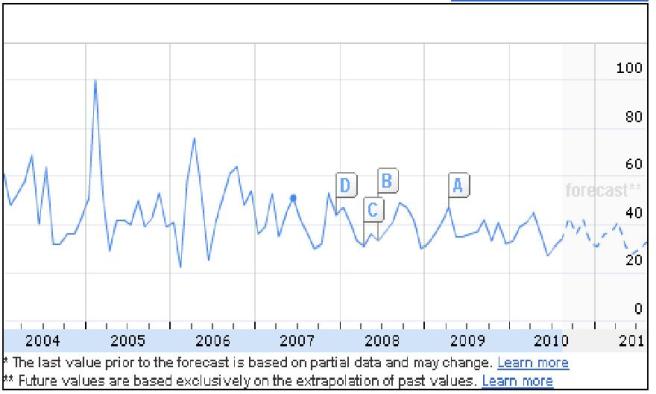 This suggests a peak of interest in ICT4D as a search term in 2006, and a small but steady decline thereafter.  A conclusion only slightly undermined by the fact that it records 100% of searches coming from the US; and the fact that the graph was a somewhat (though not greatly) different shape when I looked at it yesterday.

In any case, Google Insights data is just relative to the recorded peak of “100”.  For a guide to absolute search levels, Google Adwords suggests a global average of 5,400 searches per month using “ict4d” during mid-2009 to mid-2010 (for all countries, in English).   (For comparison, “ictd” scores 2,900 (though a bit messed-up because ictd can mean things like “implantable cardiac therapy device”), and “development informatics” scores 1,300.)  And just in case you want to feel bad about ICT4D as your chosen field, “e-government” scores 200,000 monthly searches even though it is, like, sooo 20th century as a concept.  (A joke, by the way, just in case you were considering buying my e-Gov textbook!)  I did the same search some months back: the monthly average for 2009 alone was about half the figures shown here suggesting an increase in ICT4D search activity in 2010.

Lastly we can track ICT4D and related items recorded in Google News:

Looking at the individual news items recorded, there is some evidence of a WSIS effect creating mini-peaks in 2003 and 2005.  In general, the level of news items seems to have been fairly steady since 2006/2007 – it remains to be seen if the extrapolations for 2010 (showing a significant increase in interest) are borne out.

Overall conclusions are as follows:

– The base of data that Google Analytics provides is too small and uncertain to draw any strong conclusions.

– Since its first appearance around 2003 “ict4d” has been very useful for those in the field, but it has not really made it into the mainstream: something worth bearing in mind when trying to write for a mainstream audience.  News stories and searches more often use broader terms (as another exemplar, of the top 40 search terms used to find items on this blog, only 6 contain the term “ict4d”).

– The rapid recent rise in academic publication on ICT4D is not mirrored here.  There are some signs of a small peak of interest in the mid-2000s, but that might be exceeded in 2010, and the broader picture is one of fairly steady interest in ICT4D as a news and web search item during the latter half of the 2000s.

But maybe someone with better knowledge of Google stats will proffer some other conclusions . . .