In previous blog entries, I have discussed: the process by which the post-2015 agenda is being created; its importance; its content; and the way in which it reflects changing trends and priorities in international development.

In this entry, I summarise the findings from a recent working paper: “ICT4D 2016: New Priorities for ICT4D Policy, Practice and WSIS in a Post-2015 World”.  This presents results from a content analysis exercise which compared the content of the post-2015 development agenda against the content of nearly 1,000 pages of ICT4D-related text gathered from WSIS+10 review and vision activities.

The basic comparison is shown in the figure below.  It provides a measure of “ICT4D gap” by plotting the extent of difference between the post-2015 text and the WSIS+10 documentation; aggregated into a set of development issues.  Issues above the line are more highly represented in ICT4D than in the post-2015 agenda; issues below the line are less highly represented.  The larger the indicator the greater the over- or under-representation.

This chart plus a whole set of other analytical data (see online paper for details) produce the ICT4D priority map shown below.  Laterally, it sorts issues in terms of their relation to development.  Mainly by type of goals – environmental, economic, social, political, or cross-cutting – but also including development mechanisms, of which ICT itself is one. 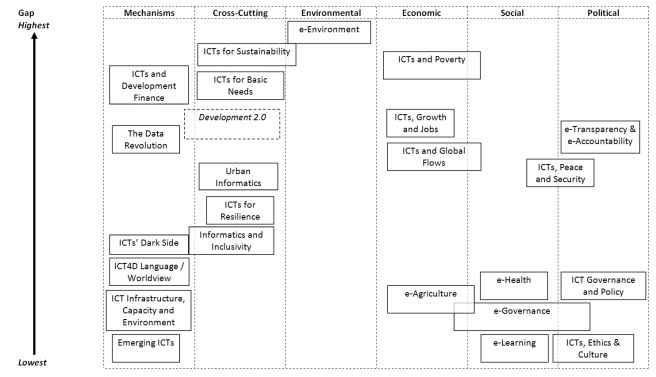 Vertically, it sorts issues in terms of gap.  The higher up the diagram a topic appears, the greater the gap between its presence on the post-2015 agenda and its presence in current ICT4D policy/practice as exemplified by WSIS.  The larger the gap, the greater the need for additional attention to be paid to that topic.  Put another way: in reshaping future WSIS priorities specifically and ICT4D priorities more broadly, there is a logic in starting at the top of the figure.

Further details about the topics identified in the map can be found in the online paper.