In a previous post, we provided a discussion of how the analysis of user-generated content (e.g. comments/posts on social media and/or job review sites) can help in understanding perceptions of digital gig workers. The prevailing assumption is that generally, digital gig workers contend with non-standard working conditions, e.g. the lack of social security coverage, long working hours, lower salaries, and the lack of benefits. Nevertheless, it is believed that digital gig workers in the Global South in particular perceive their jobs as being better than local benchmarks (i.e. office-based work).

To test the above assumptions, we developed and employed automatic text analysis methods to answer the following research questions:

We hereby present the results of analytics in the way of answering the questions above.

Firstly, we collected online posts published by digital gig workers from Glassdoor, a web-based platform for sharing reviews of companies and their management. Focussing on reviews of the digital gig companies Upwork, Fiverr and Freelancer, we retrieved a total of 567 reviews, 297 of which include geographic metadata (i.e. the geographic location associated with the account/profile of the user posting a review). For our text analysis, we made use of the Pro and Con fields that each review came with.

Based on the NRC Emotion Lexicon, a dictionary-based emotion detection method (implemented in the R statistical package) was applied on the reviews, classifying them according to Robert Plutchik’s eight basic emotions: Joy, Trust, Fear, Surprise, Sadness, Anticipation, Anger, and Disgust. We then grouped the reviews as either coming from the Global North or the Global South based on the geographic metadata attached to them. Shown in the figure below are the 15 most frequent emotion-bearing words found within reviews, represented according to the emotions they express. Bars in amber correspond to words prevalent in reviews from the Global North (GN) while those in blue pertain to those in reviews from the Global South (GS). 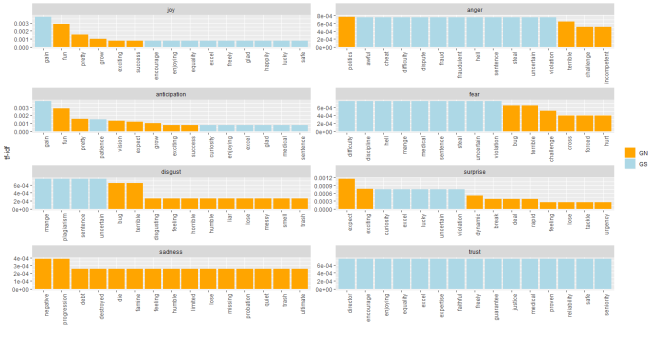 Meanwhile, our results show that digital gig workers from both GN and GS express negative emotions. On the one hand, GS reviews were the source of 11 and 10 words associated with Anger and Fear, respectively. On the other hand, 15 and 11 words associated with Sadness and Disgust, respectively, were contained in GN reviews. This suggests that generally speaking, digital gig workers do have to contend with less than ideal working conditions, which in turn trigger such negative emotions.

Finally, 10 words associated with Surprise came from GN, 5 from GS. It is worth noting though that this particular emotion can either be negative or positive depending on context.

These results are but “teasers” to the full results of our automated analysis. Further details including the topics/themes towards which such emotions are targeted, as well as answers to the second and third research questions stated above, will be presented by Dr Victoria Ikoro in the upcoming 3rd Annual ICT4D North Workshop to be held in the Management School of the University of Liverpool on the 6th June 2019.

View all posts by rbbatista